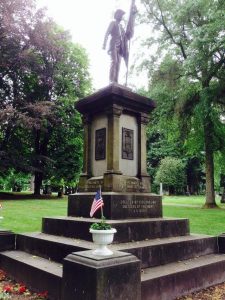 Originally designated as Armistice Day, this holiday memorializes the truce that ended World War I — which was completed at the eleventh hour of the eleventh day of the eleventh month of the year. WWI was thought to be The War to End All Wars until World War II began twenty years later.

Congress changed the name to Veterans Day in June 1954 with the intent to acknowledge the end of two world wars, rather than just one, and recognize the contributions and sacrifices that all veterans had made while serving the country — in wartime and peace. President Eisenhower issued a Presidential Proclamation for Veterans Day in October 1954, calling for all Americans to “solemnly remember the sacrifices of all those who fought so valiantly, on the seas, in the air, and on foreign shores, to preserve hour heritage of freedom, and let us reconsecrate ourselves to the task of promoting an enduring peace so that their efforts shall not have been in vain.”

While the holiday is commonly named “Veteran’s Day” or “Veterans’ Day” in calendars and advertisements (spellings that are grammatically acceptable), the United States Department of Veterans Affairs states that the attributive (no apostrophe) rather than the possessive case is the official spelling “because it is not a day that ‘belongs’ to veterans, it is a day for honoring all veterans.